To read the whole story, purchase
"Blood of the Martyrs:
Trappist Monks in Communist China ."

Enemies of the State:
Catholic Priests
.....in Communist China

by Theresa Marie MoreauFirst published in The Remnant Newspaper, April, May, June 2011

Eritis mihi testes. (You shall be my witnesses.)

Distant gunfire in the dead of night startled the Trappist monks from their slumber. Inside the darkened monastery, they listened as Chinese Communist soldiers viciously attacked a city only a few miles to the north.
Suddenly, the far-off explosions drew nearer. Red soldiers running from the city of Chengtingfu headed south, straight for Our Lady of Joy, the Trappist monastery situated on a 300-acre alluvial island that parted the waters of Hutuo River.
The moon, nearly full that April 4, 1947, highlighted the soldiers in an eerie chiaroscuro of gray, as they bolted toward the North Bridge, the railroad trestle that crossed the north strand of the river. Continuing southward along the railroad tracks that paralleled the monastery’s enclosure wall, the Red guerilla warriors raised their weapons and aimed toward the cloister. Explosions from the barrels sent bullets flying. Dirt puffed up gray dust clouds. Craters dimpled mud brick walls. A single shot entered the shoulder of Father Benedictus-Josephus Labre Chao, but exited through the other, without even nicking a bone. The Communist combatants continued along the tracks, crossed the South Bridge and headed toward the city of Shihchiachuang, several miles to the south. And just as suddenly as they had appeared, they disappeared.
Madness passed. Calmness returned. In the quiet of the early morning, at 3:30 a.m., the assigned monk rang the bell to signal the hour for Matins. Alerted by the clanging, the guerilla soldiers – dressed in civilian clothing – returned to the island, clambered over the enclosure wall and swarmed the monastery. They thought the bell had been a signal to their enemy in the Chinese Civil War.
“Where are the Nationalists?” demanded the soldiers, as they grabbed a few of the closest monks, roughing them up.
“I don’t know,” the monks answered. It was the truth. It was also the safest answer.
Again, the irregular troops left just as suddenly. 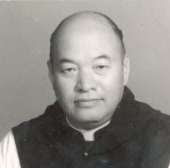 Following the attack on their Community, the monks held a meeting to discuss its future. Stay or evacuate were the two options that Father Prior Paulinus Li offered each one. He forced no one to stay. He forced no one to leave. For some of the 60-or-so monks, it seemed impossible to stay. For others, it seemed impossible to leave. But, leave? To where? Prior Paulinus thought of Bishop Jacques-Victor-Marius Rouchouse (Society of Foreign Missions of Paris).

To read the whole story, purchase
"Blood of the Martyrs:
Trappist Monks in Communist China."


Theresa Marie Moreau can be reached at TMMoreau@yahoo.com.

Posted by Veritas Est Libertas at 3:00 PM No comments:

Judge's comment: "I was drawn into this in-depth series of stories from the opening sentence and couldn't put it down until I had read every word of every story. That, to me, represents quality writing and reporting, which are hallmarks of exceptional feature writing."

To read the whole story, purchase
"Blood of the Martyrs:
Trappist Monks in Communist China."


They Died in China:

by Theresa Marie MoreauFirst published in The Remnant Newspaper, September and October 2010

Father Chrysostomus Chang plumbed the depths of his human will for a supernatural strength. With only a few minutes remaining of his life in the material world, he lifted his thoughts to the spiritual. Through screams from the mob, he addressed his confreres at his side one last time, to prepare them not for death, but for life, everlasting life.
“We’re going to die for God. Let us lift our hearts one more time, in offering our total beings,” he said.
Helpless, the six Trappist monks stood handcuffed and chained on a makeshift platform, targets of a frenzied hatred that surged toward them. The blood-encrusted, lice-infested men, wearing rags caked in their own filth, had nowhere to run, no one to help them. After six months of mind-bending interrogations and body-rending torture, it was over. It was all over.
The verdict had just been read by a Chinese Communist officer: Death. To be carried out immediately.
Hundreds of crazed peasants, with fists raised, with contorted faces, with spit-covered lips, screamed rehearsed slogans of approval for the approaching slaughter. Executioners – reliable Party henchmen – rushed to ready their rifles to exterminate the Roman Catholic monks, believers in the superstitious cult, lovers of the God on the Cross imported from the Imperialist West.
And so it happened on January 28, 1948, in the dead of winter in Pan Pu Tsun, an unmapped village, a frigid heathen hell in the Mongolian mountains, somewhere in the frost-covered north of the Republic of China.
Just over the ridge from the pandemonium staged by the soulless Chinese Communists – believers in the materialistic cult, lovers of the god of death and destruction – lay the charred ruins of Our Lady of Consolation, the once-majestic abbey the monks had called home.
Jostled in the madness, the monks fell to their knees. With their swollen hands tied and chained behind their backs, they couldn’t even cross themselves – In the name of the Father and of the Son and of the Holy Ghost – a final time.
The death squad – Communist soldiers at the ready – loaded their rifles with fresh rounds of ammo.
Shots rang out. One, then the next, followed by the next, the monks collapsed upon the blood-splashed, frozen ground. Their lifeless bodies, dragged to a nearby sewage ditch and dumped into a heap, one on top of the other. Alerted by the shots, wild dogs, roaming the village’s dirt roads, scavenging for scraps, hurried over to the bodies to investigate. Sniffing, they lapped up the warm blood, steaming in the icy air.
It was all over. Our Lady of Consolation was no more.
The tragic tale of Our Lady of Consolation began 64 years earlier on June 16, 1883. On that glorious day, as the hot summer wind from the Gobi Desert carried its golden dust eastward, and the cicada nymphs emerged reborn, buzzing in celebration of their emergence into new life from their old shell of death, Father Ephrem Seignol, a Trappist monk stood on a ledge, in the shadow of West Soul Mountain. Atop a ridge nearly 10,000 feet high, that much closer to God, he glimpsed for the first time at the valley of Yang Kia Ping (translation: Yang Family Land). Before his eyes lay the birthplace of the Trappist Community in China. 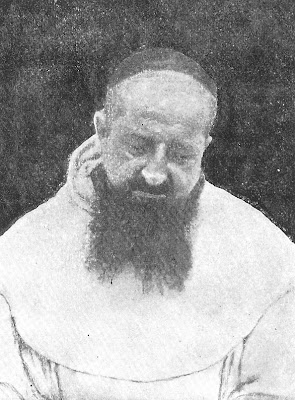 With him, Father Ephrem brought little else except his dreams, his duties of state, God’s will and the name of the future abbey. Before he had departed from his priory in Tamie, France, for China, from the West for the East, from the Occident for the Orient, he visited his close friend Father John Bosco, in Turin, Italy. The future saint suggested that the abbey be christened with the same name as the chapel in which they were sitting: Our Lady of Consolation. And so it would be.

The Trappists had answered a call from Roman Catholics in the village of Fan Shan. Desperate for Mass and the sacraments on a regular basis, the Chinese natives had enticed the monks with an offer to sell to the religious order an immense valley of rocky, untilled, virgin land in Chahar province (now Inner Mongolia Autonomous Region and Hebei province).
Yang Kia Ping, approximately 60 square miles in size, about 75 miles – as the Mongolian ring-necked pheasant flies – northwest of Peking (old form of Beijing), the northern capital of what was at that time Imperial China, where Empress Dowager Tzu Hsi (old form of Cixi) ruled from the Inner Palace of the Forbidden City.
Travel to the site of the future abbey was measured in days, not hours.
Back in 1883, when Father Ephrem arrived in the valley, the Imperial Peking-Kalgan Railway didn’t exist. Construction wouldn’t even begin until 1905, with its completion in October 1909. The fastest, smoothest form of travel consisted of jostling atop a mule, along narrow dirtways through the fields and plains. To reach the stony plateau in the Taihang Mountains in Huailai County, a traveler had to be on alert through the heavily wooded areas, on the lookout for bandits and bears. Along the death-defying paths, one had to rely on a trustworthy mule that tested the rock-strewn trails with its hoof before putting its weight down, hugging close to towers of sheer rock reaching skyward to avoid falling straight down the ravine on the other side.
To form a Trappist religious Community from a valley of rocks seemed intimidating, but not impossible. With religious recruits from Europe and from the local villages, despite a slow start, eventually, on those rocks, they built their church, Our Lady of Consolation, an impressive replica of the architectural beauty at Mount St. Bernard Abbey. Pilgrims arriving for the first time and looking down upon the abbey from any ridge high in the surrounding mountains, saw a Community so large inside its enclosure, it appeared like any village in the hills. The church, designed by Belgian Scheut missionary Father Alphonse de Moerloose (Congregation of the Immaculate Heart of Mary), was encircled by several single-story buildings and three courtyards. A vegetable garden sprouted up in the middle of the valley, along with its blossoming fruit trees and, of course, a luscious vineyard, where Brother Ireneus Wang, the self-taught viticulturist, tenderly coaxed the grapes, harvested for the Mass wine. 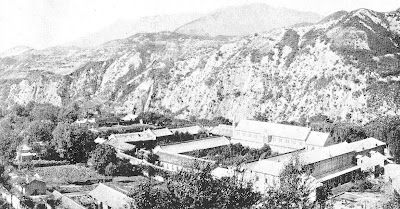 From the Chinese countryside, and even from the highly cultured, international port city of Shanghai, many boys and men had felt the call to the Trappist austere way of life, with its silence and solitude, prayer and penance. The abbey had been blessed with vocations: oblates, postulants and novices. So many joined the Community, that Pope Pius XI, in his 1926 encyclical “Rerum Ecclesiae,” lauded the monks for their exceptional work in the missions and of winning vocations by bringing pagans to the Church. Two years later, on April 29, 1928, the abbey opened a daughterhouse, Our Lady of Joy, with 95 Community members, about 3 miles from Chengtingfu (old form of Zhengding), in the province of Hopei (old form of Hebei).
m his family, he had been one of seven boys. Four became priests – two Trappists...


To read the whole story, purchase
"Blood of the Martyrs:
Trappist Monks in Communist China."


Theresa Marie Moreau can be reached at TMMoreau@yahoo.com.
.
.
.