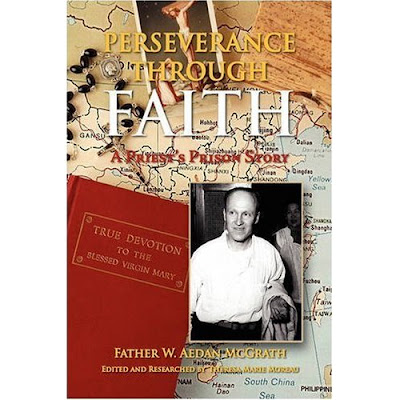 Father McGrath was a Columban priest who was imprisoned and tortured in China for about three years. By collect-ing and editing scraps of information, Moreau pieced together McGrath's life in "Perseverance through Faith: A Priest's Prison Story."

In an interview, Moreau said that since the 1920s, China has persecuted, tortured and killed Catholics. She called it an "amazing history" no one knows because of "the indescribable fear" the Chinese have of Communists.

"One doesn't have to go back to the ancient days of Rome to read about where an untold number of Catholics have suffered persecution, torture and death," she said.

Today, Moreau said, in China's underground church, there are still priests who have been tortured or killed, and many who have just disappeared.

"We cannot even imagine what it is like to live in these conditions," said Moreau.

Peffley knew McGrath personally. As a child, he met McGrath though the Legion of Mary, a Catholic service organization the McGraths belonged to. When McGrath returned from China, he would speak at Peffley's college where the talks were recorded. Peffley held on to those recordings and passed them on to Moreau for her research.

"He was very saintly, very holy, a short energetic Irishman, full of life and vigor even at the age of 95," Peffley said of McGrath. "He was a wonderful priest, had a great sense of humor … very much fun-loving."

Peffley said he would not be surprised if McGrath was considered for sainthood in the Catholic Church.

Laraine Bennett, coordinator for the Guest Speaker Committee at Holy Trinity, said, "Many people were very surprised to hear about how terribly the people suffered under Mao."

Peffley said ultimately he wants people to know what brothers and sisters have suffered for their faith in Christ.

"We take our faith for granted," he said, "and when we hear something like this, it's edifying."